Thanks to all of you for making 2016 at Scott Bruce Tuna Charters another memorable and successful year!

For everyone who joined myself and Walter aboard the “Caroline~Jake” and/or the “Best O’Luck ’99”, we hope you enjoyed your time with us as much as we enjoyed having you aboard. It was great introducing new people to our bluefin tuna sport fishery on PEI.  It is always gratifying when guests, who are great anglers themselves, return with us for another duel with “old blue”! We successfully hooked and released tuna of all sizes, including one, which may have been the largest bluefin tuna I have ever had to the boat! The thrill of hooking a giant never loses it’s lure. 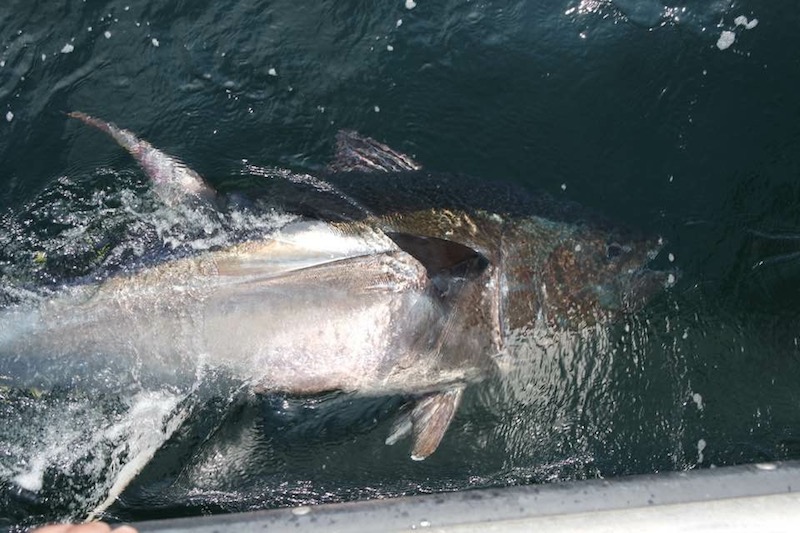 Someone who knows what it is like to catch some of the most unique fish in the world is Cyril Chaquet.  Cyril is known for being the host of the History Channel’s , “Chasing Monsters”.

I met Cyril at the Canadian National Sportsmen’s Show in Montreal last February and soon after it was decided that Cyril was coming bluefin tuna fishing with us to record an episode for “Chasing Monsters”. I can’t reveal to you what happened while filming but I can tell you it was an action-packed trip, and between you and me, his crew told me it would be his best show yet. Cyril’s film crew caught some scenes on tape that will blow your mind; I can’t wait to see it! The show is broadcast all over the world with the first airing beginning in March in Quebec.

On each trip many stories were told, and many more were born. The stories that our guests take from their experience with us are what we pride ourselves on. With trusted spokespeople like Jeff Hutcheson, Norman Byrns, and Stephane Galli (Partir Pecher magazine) telling our story, we are in good hands.

As I am sure it is true with all of you, we can’t wait to get back on the water! Last year saw some changes to the “Caroline Jake” such as new stern mural and much more power under the floor with a new 625hp Volvo. This, along with some updated electronics and our new in 2016 RH Custom Rods, has us biting at the bit to get you out on the water with us for some of the best fishing you’ll ever experience!

If you are in Montreal February 16-19 2017, be sure to stop by to see us at booth 539 at the Canadian National Sportsmen’s Show at Place Bonaventure.

The above video is Jeff Hutcheson describing his battle with his first giant bluefin tuna.

We are booking bluefin tuna charters now for the 2017 season.  We look forward to hearing from you soon!

All the best from our family to you and yours!